The Panasonic LUMIX DC-S1R is an extremely well built professional camera with significant protection against the elements. It combines speedy performance with very high 47.3-megapixel resolution, providing exceptional image quality that stands out from even the best of its competitors. In addition, the High Resolution multi-shot feature provides huge 187-megapixel images with incredible levels of detail. Furthermore, the camera’s ergonomics are first-rate, with a large electronic viewfinder that sets new standards for detail and a three-way tilting touchscreen. Add in comprehensive video features, and you have a complete camera for professionals. 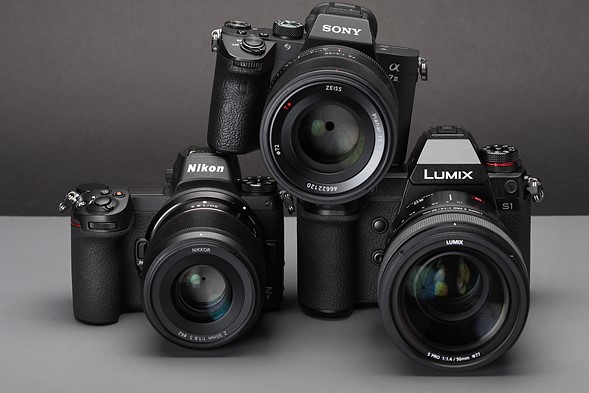 The Sony is, overall, the best all-rounder: it does well at just about everything. Sony has been making full-frame mirrorless cameras longer than anyone, which gives it an advantage both in terms of technological development (especially autofocus) and lens selection. However, its focus on developing new and exciting features has left its user interface looking awkward and clunky by comparison. The Panasonic is a more feature-laden camera and yet is arguably easier to use and configure.

The Nikon Z6 runs the Sony very close, especially with its improved focus operation with firmware v2.0. In many respects we prefer the Nikon’s handling and UI over the Sony’s.

The choice you make is likely to engender a degree of commitment to a new lens system and, having looked at each camera in detail, we’d say thinking long-term about lenses is more important than focusing on the relatively minor differences between these three cameras.

This is the REAL WORLD REVIEW of the Panasonic LUMIX S1 hybrid full frame Mirrorless Camera. How does this camera compare to the Sony a7 III, Nikon Z6, and Canon EOS R? Is it better, what do I like and not like. Be sure to download the sample RAW files from this camera right here. https://froknowsphoto.com/s1rwr/

Thanks to an optional firmware update, the Panasonic S1 now offers advanced video features historically reserved for the company’s GH series of cameras. Does this make the S1 the best full frame camera for video on the market? The boys in Calgary have been putting it to the test and have the answers.